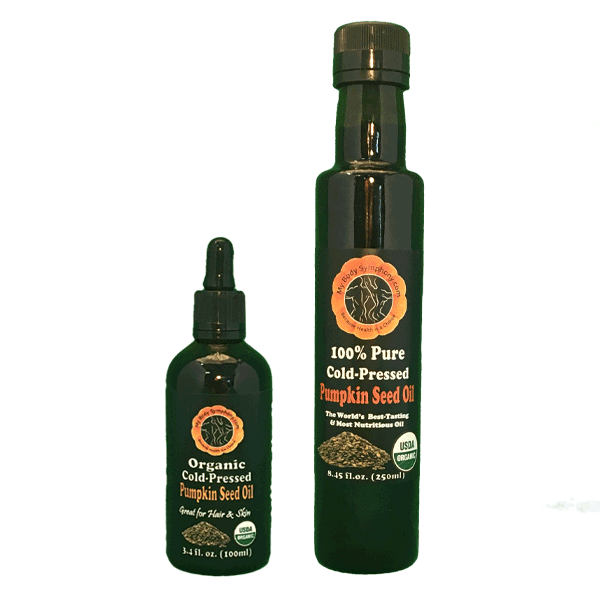 The Best Tasting & Most Nutritious Oil on the Planet!

See Nutrition Facts & Ingredients for each version below.

Cold-pressed to preserve all nutrients.

Revered as a Superfood for thousands of years by Ancient Aztecs, American Indians, Greeks, & Romans.

Organic Pumpkin seed oil has a long list of reported & documented health benefits. It can be used both internally and externally on the skin and hair, is great for your overall health, your Skin, your Hair, and several other important body tissues!

In addition to numerous nutrients, pumpkin seed oil contains substantial amounts of two phytosterols that naturally block the formation of DHT . DHT is ‘dihydrotestosterone’, it is a breakdown product of testosterone that has some potentially negative effects on various tissues of the body when elevated. Most notably it is believed to be the primary culprit in shutting down hair follicles leading to male pattern baldness and hair loss in general . It also has a detrimental impact on the prostate gland causing it to become enlarged. This is known as BPH. (benign prostatic hyperplasia).

Consuming and applying pumpkin seed oil topically has been reported to help with both reducing hair loss (and stimulating new hair growth) and reducing the size of enlarged prostates, however, no claims are being made for such. This is simply provided for educational and informational purposes.

Pumpkin seeds have long been recognized as a major superfood for thousands of years by several different cultures such as The Ancient Egyptians, Aztecs, and American Indians. They are nutritional powerhouses packed full with a wide variety of vital nutrients. Perhaps that's part of the reason that pumpkins have become the symbol of harvest and plenty.

Since they learned how to press the oil from seeds, pumpkin seed oil has been heralded for its unique nutritional qualities and health benefits. Modern science has now confirmed these long-held beliefs as a nutritional powerhouse with some unique and powerful health benefits:

Due to the above mentioned DHT blocking effect, PSO has been shown to reduce hair loss and enhance hair regrowth associated with Male Pattern Baldness (which in spite of the name effects men and women).*

Ingestion Applications: All of the above!

Our organic oil is cold-pressed and cold-processed using a hydraulic press instead of an expeller or screw press as most others use. This is really important to understand because expeller (screw) presses generate a great deal of heat due to friction, often getting up to well over 200 degrees Fahrenheit (although they can claim it to be cold-pressed since they aren't 'intentionally' adding heat). Something that is vital to know about oils is that they are sensitive to heat, light, and oxygen. Virtually all other companies we know of (especially in the US) use expeller presses. They are very efficient at pressing oil BUT the high heat they produce is very problematic.

That amount of heat, combined with oxygen and light, definitely damages the oil. That's why we use a Hydraulic press where the temperature never exceeds 90 degrees F.

After pressing, we immediately place our oil in opaque, air-tight containers and stored in a cool location to avoid degradation. That, together with our true cold-press process means that you will get the highest quality, un-damaged oil made anywhere.

Strong antioxidant support from multiple nutrients, improved insulin response, antimicrobial properties, associated with decreased cancer risk and possible benefits in BPH (Benign Prostatic Hyperplasia) and in helping to prevent hair loss and regrow thinning hair. Two of the phytonutrients that pumpkin seeds contain are Phyto-Sterols that have been documented to be natural DHT-blockers. DHT (dihydrotestosterone) is implicated as one of the primary causes of both balding and BPH. By naturally blocking the conversion of testosterone into DHT, these phytosterols, and therefore pumpkin seeds (including both pumpkin seed protein and pumpkin seed oil) have been shown to help halt and reverse hair loss and prostate enlargement.

PUMPKIN SEED PROTEIN IS ASSOCIATED WITH:

17oz (both with pour spout)

*All ingredients used are kosher and Non-GMO, however, we have chosen not to bear the additional expenses of additional costly 'certifications' beyond our Department of Agriculture & Organic Certification processes (Organic cert. by CCOF). Our goal is to provide the highest quality products at affordable prices and focus on internal quality controls and product innovations. Being distracted by additional external 'certification organizations' is not compatible with those goals. 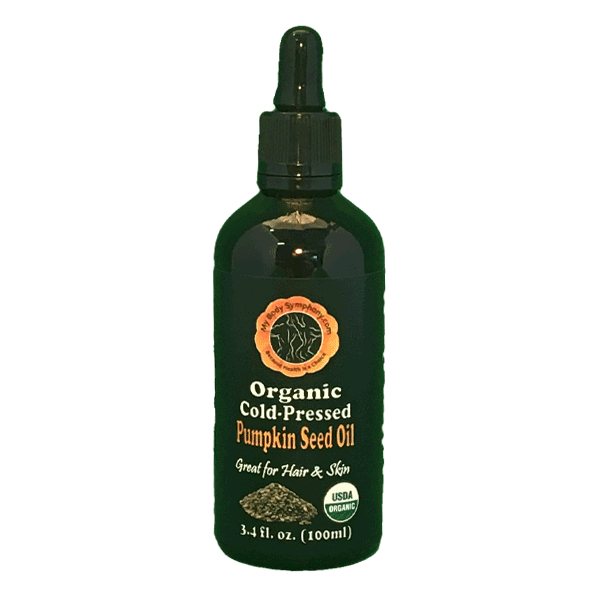 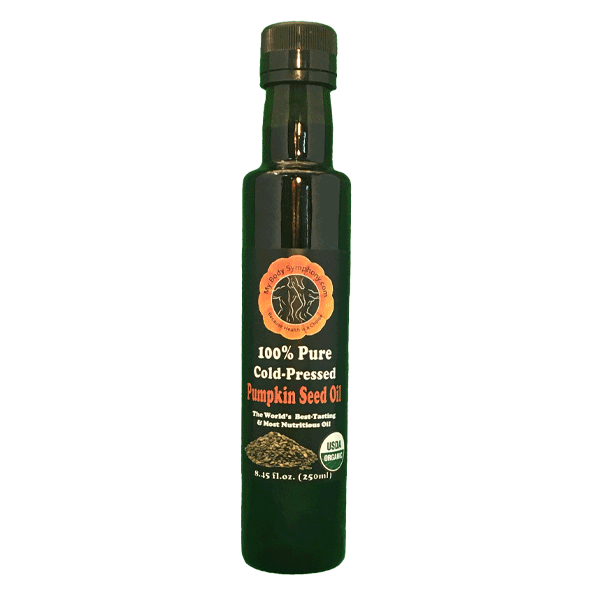