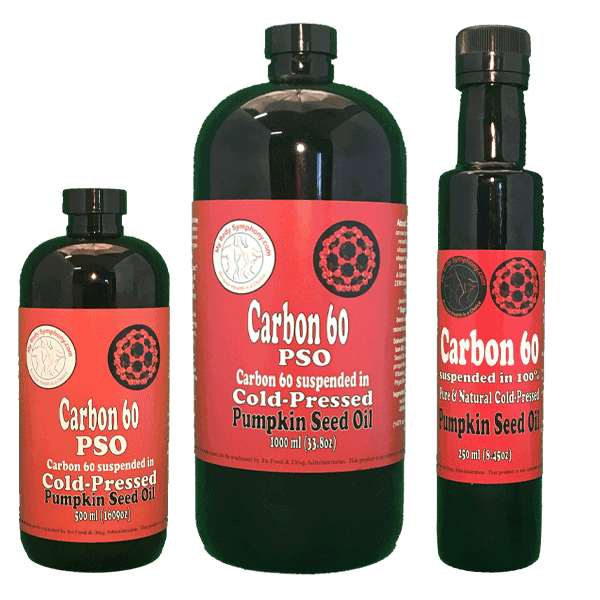 Possibly The Biggest Health Breakthrough In
Our Lifetime!

A Super-Antioxidant and Detoxifier, A Major Adaptogen… And it Doubled the lifespan of rats in a landmark study.

See Nutrition Facts & Ingredients for each version below.

Cold-pressed to preserve all nutrients.

Carbon 60 is a naturally-occuring form of carbon. It is not a food or a drug…

In 2012 researchers from the Univesity of South Paris published the results of the first toxicity study performed on C60. The shocking thing about it was that is was a COMPLETE failure because it FAILED to kill the rats.

A toxicity study, also called an "LD50" study is designed to find the lethal dose of a given substance. Instead of killing the rats, C60 DOUBLED their lifespan!

ALL LIFE IS CARBON-BASED

All life on this planet is CARBON-based. Carbon 60 is simply a recently discovered form of carbon consisting of 60 carbon atoms shaped like a hollow soccer ball.

It has potential uses in many industries including medicine, however, it will likely take another 10-20+ years for it to actually get into widespread use through "conventional" sources.

Thousands of people (and their pets) are already using it and many report exceptional results with ZERO negative side-effects. The University of S. Paris study confirmed its safety and potential health & life-extension benefits.

In the Paris study, the C60 was suspended in olive oil. ours is suspended in organic, cold-pressed pumpkin seed oil. All of our research indicates that this is a significantly better carrier oil to use.

A Super-Antioxidant & Antioxidant Catalyst* that works at multiple levels of the antioxidant cascade. It is the strongest antioxidant yet discovered. Note, antioxidants work as a team, so keep taking the others.

A Cellular & Whole-Body Super-Detoxifier.* Like other forms of carbon/charcoal that have been used as a detoxifier for thousands of years, C60 has the added benefit of being able to go virtually everywhere. Charcoal is limited to the GI tract.

An Adaptogen* due to the above functions which impact multiple organs, systems, and the body as a whole.

Carbon 60 is a naturally-occuring form of carbon. It is not a food or a drug

No claims can be or are being made for it. Reported benefits vary greatly. Those who are already healthy are less likely to "notice" any changes although it will still be performing its antioxidant & detoxification functions.

Please note: This is a substance that should ideally be consumed long-term by those who are serious about their health and are committed to optimum health, healthy aging, and maximum longevity.

What Our Customers Are Saying

Don't just take it from us, let our customers do the talking!

Anecdotal evidence is quite often all we have to work in our favor. When that evidence is this significant, it begs attention.

He has been under chemotherapy treatments, as well as some trials, for about 3 years. I'm talking about one person! He is a walking miracle. His doctors are totally baffled. I spoke with him today. He is totally astounded with a recent evaluation by his physicians at Baptist Hospital in Winston-Salem, NC.

1 - He no longer has COPD. His readings are 83, with COPD being over 93. He HAD COPD. His doctor says that he has not seen this, ever.
2 - When I saw him in November, his wife was gleeful to inform me that whenever he has his bloodwork results reported, his doctors are baffled with the quality of the results. Given the nature of his multiple afflictions, it is surprising to all of them that his bloodwork is as good as it is.

For a little history, his first diagnosis was for what was believed to be early stage pancreatic cancer. Upon their surgery to remove that early tumor, they only then discovered the presence of the liver cancer. It was decided that removal of this pancreatic tumor had to wait for a later time.

I am not certain of all of the steps that have occurred in between. Suffice to say that the absence of COPD, the higher than expected bloodwork, are wonderful starts to helping him, if this is actually the reason.

I had the mildest 'omicron' exposure (2 positive antigen tests over 5 days) of all in my household recently. I'm the oldest, yet, had the mildest, most brief symptoms.

*All ingredients used are kosher and Non-GMO, however, we have chosen not to bear the additional expenses of additional costly 'certifications' beyond our Department of Agriculture & Organic Certification processes (Organic cert. by CCOF). Our goal is to provide the highest quality products at affordable prices and focus on internal quality controls and product innovations. Being distracted by additional external 'certification organizations' is not compatible with those goals.